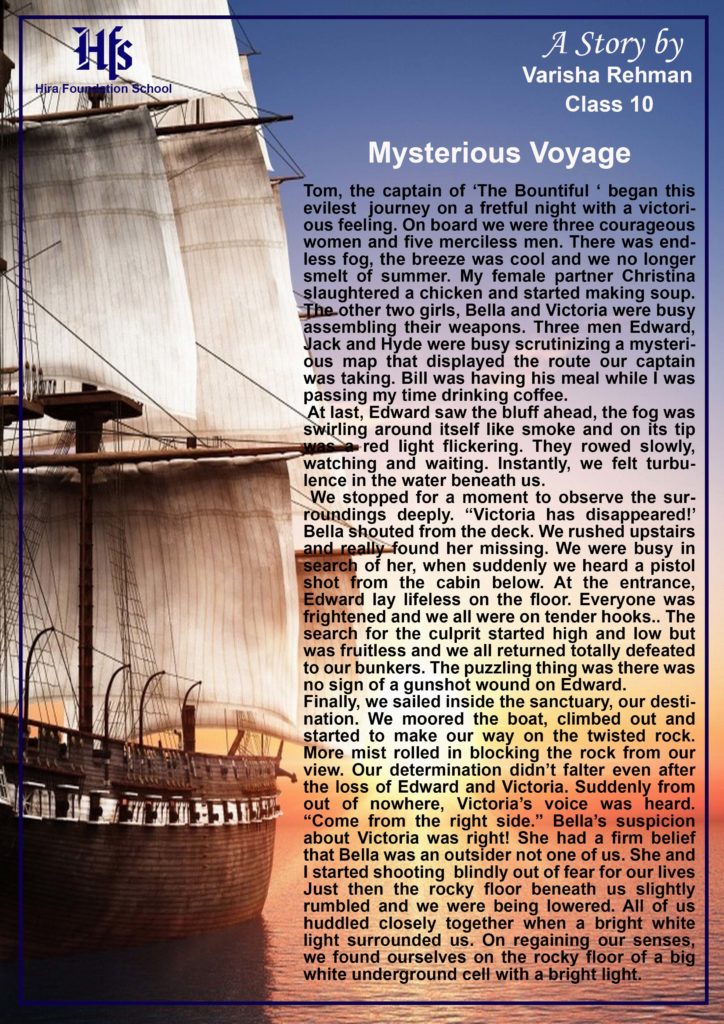 Tom, the captain of ‘The Bountiful ‘ began this evilest journey on a fretful night with a victorious feeling. On board we were three courageous women and five merciless men. There was endless fog, the breeze was cool and we no longer smelt of summer. My female partner Christina slaughtered a chicken and started making soup. The other two girls, Bella and Victoria were busy assembling their weapons. Three men Edward, Jack and Hyde were busy scrutinizing a mysterious map that displayed the route our captain was taking. Bill was having his meal while I was passing my time drinking coffee.

At last, Edward saw the bluff ahead ,the fog was swirling around itself like smoke and on its tip was a red light flickering. They rowed slowly, watching and waiting. Instantly, we felt turbulence in the water beneath us.

We stopped for a moment to observe the surroundings deeply. “Victoria has disappeared!’ Bella shouted from the deck. We rushed upstairs and really found her missing. We were busy in search of her, when suddenly we heard a pistol shot from the cabin below. At the entrance, Edward lay lifeless on the floor. Everyone was frightened and we all were on tenter hooks.. The search for the culprit started high and low but was fruitless and we all returned totally defeated to our bunkers. The puzzling thing was there was no sign of a gunshot wound on Edward.

Finally, we sailed inside the sanctuary, our destination. We moored the boat, climbed out and started to make our way on the twisted rock. More mist rolled in blocking the rock from our view. Our determination didn’t falter even after the loss of Edward and Victoria. Suddenly from out of nowhere, Victoria’s voice was heard. “Come from the right side.” Bella’s suspicion about Victoria was right! She had a firm belief that Bella was an outsider not one of us. She and I started shooting blindly out of fear for our lives Just then the rocky floor beneath us slightly rumbled and we were being lowered. All of us huddled closely together when a bright white light surrounded us. On regaining our senses, we found ourselves on the rocky floor of a big white underground cell with a bright light.