There Is No Elevator To Success NEWSPAPER- A POWERFUL LEARNING RESOURCE 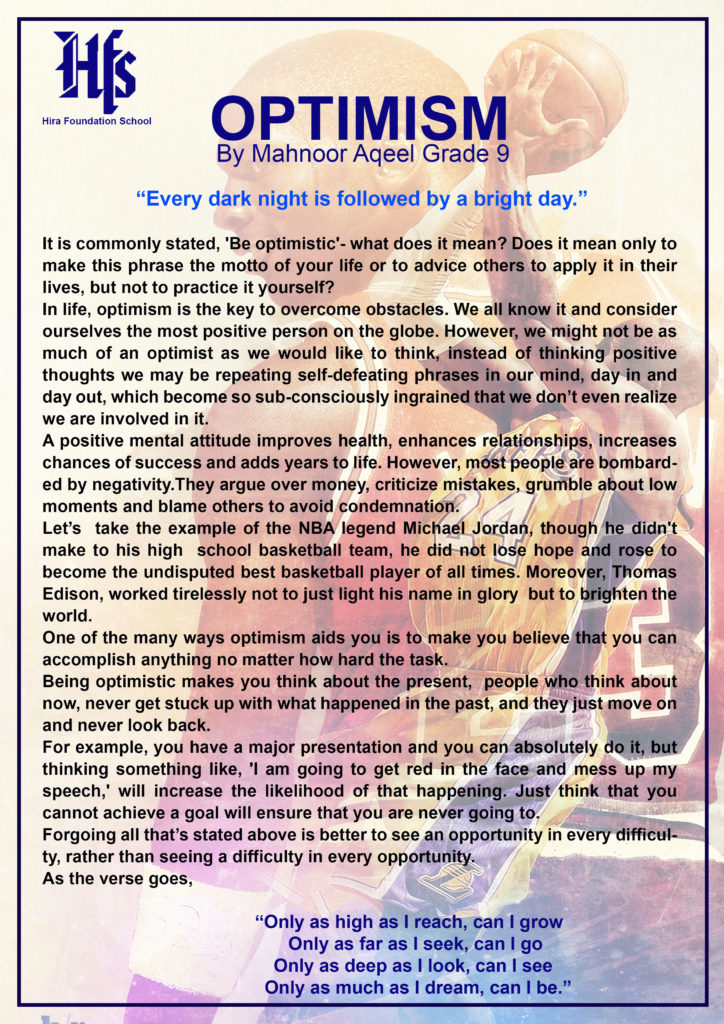 “Every dark night is followed by a bright day.”

It is commonly stated, ‘Be optimistic’- what does it mean? Does it mean only to make this phrase the motto of your life or to advice others to apply it in their lives, but not to practice it yourself?

In life, optimism is the key to overcome obstacles. We all know it and consider ourselves the most positive person on the globe. However, we might not be as much of an optimist as we would like to think, instead of thinking positive thoughts we may be repeating self-defeating phrases in our mind, day in and day out, which become so sub-consciously ingrained that we don’t even realize we are involved in it.

A positive mental attitude improves health, enhances relationships, increases chances of success and adds years to life. However, most people are bombarded by negativity ?.They argue over money, criticize mistakes, grumble about low moments and blame others to avoid condemnation.

Let’s take the example of the NBA legend Michael Jordan, though he didn’t make to his high ⛹ school basketball team, he did not lose hope and rose to become the undisputed best basketball player of all times. Moreover, Thomas Edison, worked tirelessly not to just light his name in glory but to brighten?the world.

One of the many ways optimism aids you is to make you believe that you can accomplish anything no matter how hard the task.

Being optimistic makes you think about the present, people who think about now, never get stuck up with what happened in the past, and they just move on and never look back.

For example, you have a major presentation and you can absolutely do it, but thinking something like, ‘I am going to get red in the face and mess up my speech,’ will increase the likelihood of that happening. Just think that you cannot achieve a goal will ensure that you are never going to.
Forgoing all that’s stated above is better to see an opportunity in every difficulty, rather than seeing a difficulty in every opportunity.

As the verse goes,

“Only as high as I reach, can I grow

Only as far as I seek, can I go

Only as deep as I look, can I see